In this post, we'll tell you everything you need to know about the history of fireworks, from their humble beginnings as total accidents to the sparkling future ahead.

In the Beginning — The Big Bang

Historians generally point to the second century B.C. as the time when fireworks first appeared in ancient Liuyang, China. Back then, ancient Chinese people would write on green bamboo stalks and heat them over coals to dry. If the stalks overheated, air pockets in the wood would expand and burst with a loud bang. The Chinese used these early firecrackers to ward off evil spirits and physical intruders like wild animals and mountain men.

Much later, legend states that a Chinese alchemist mixed saltpeter — potassium nitrate — with charcoal and sulfur in an attempt to formulate an elixir for eternal life.

Instead, he got a flaky black powder that exploded upon contact with fire.

This early gunpowder, or “fire drug” (huo yao), became an essential part of Chinese cultural celebrations, where people would create sparklers by filling hollowed-out bamboo stalks and setting them alight.

China also innovated the use of fireworks as weapons. Chinese archers would attach these early sparklers to arrows to make it rain fire on their enemies. The historical record also references a crude gunpowder catapult that Chinese soldiers used around 1046.

But don't get it twisted — fireworks came before gunpowder weapons. Not the other way around.

Marco Polo gets the credit for bringing fireworks to Europe from Asia, but historians debate whether he was actually Europe's first introduction to the technology. During the Crusades, Arab forces used various explosive weaponry against their European foes. While the Chinese did their best to control the flow of gunpowder out of the country, it's possible that traders on the Silk Road managed to get hold of it, bringing it to the Middle East despite China's best efforts.

The early pyrotechnicians — called fire masters — worked with a team of assistants, or “green men," who wore a suit of leaves to protect themselves from falling sparks. The green men would entertain the crowd before a show, telling jokes and lifting spirits. Being a good fire master could earn you some serious recognition — the English King James II was so impressed by his coronation presentation that he knighted his fire master for it.

During the Renaissance, pyrotechnic schools began appearing throughout the continent. Students at these prestigious institutions learned how to formulate and choreograph eye-catching displays for the public, dedicating themselves to the pyro lifestyle.

Curious about what fireworks academy might have been like? Here's a quick crash course on how fireworks explode:

Fireworks require three key ingredients — an oxidizer, fuel source and a chemical mixture for color. The oxidizer breaks the bonds in the fuel upon ignition, releasing all the energy stored within its chemical bonds in a brilliant explosion of sound and fury.

In addition to being the first Europeans to manufacture fireworks, the Italians were the ones to modernize them. Throughout the centuries, Italian scientists introduced a series of developments and enhancements that enabled pyrotechnicians to push their showmanship to the next level.

While the early Chinese were responsible for creating fireworks, Italians fine-tuned them by inventing the aerial shell — the ice cream cone-shaped cartridge that holds the firework's stars, a burst charge and an internal fuse. The shell's internal layout is what determines the firework's shape while in the air.

Italian fireworks engineers discovered that adding trace amounts of certain metals could alter the explosion's colors and brightness levels. Early fireworks were almost exclusively orange, but when Italian pyrotechnics began messing with the recipe, they changed the color game. By adding the following metals to their fireworks recipes, they were able to alter the colors of their stars:

Of these colors, blue was — and still is — the most difficult to achieve. This is because the copper compound used to create blue stars is especially sensitive to heat. As you raise the flame temperature, you increase the brightness of the star's color. But if you let the temperature rise too much, you end up destroying the metal species that creates the color, resulting in a washed-out white rather than the brilliant blue you wanted. 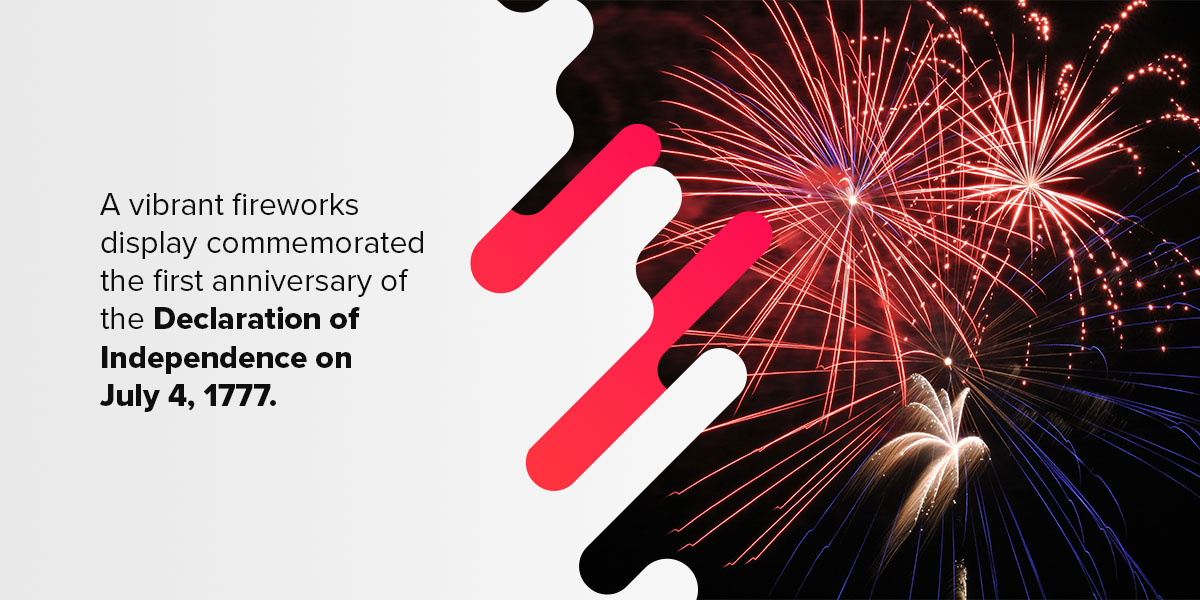 Renaissance Europeans loved their fireworks so much that, when they traveled to the New World in the early 17th century, they made sure to throw some on their ships.

There isn't much documentation about fireworks in the early colonies, but according to some historians, Captain John Smith set off the first American fireworks display in the Jamestown settlement.

Later, a vibrant fireworks display commemorated the first anniversary of the Declaration of Independence on July 4, 1777 — a tradition that continues to this day, as Founding Father John Adams predicted.

Consumer fireworks became widely available soon after, and for the rest of the century, American politicians used fireworks displays to draw crowds to their speeches. However, colored aerial fireworks remained unavailable to Americans until the late 1800s, when Italian immigrants brought them from the Old World. Fireworks have remained a staple of American celebrations ever since.

Fireworks and the Law

Apparently, early Americans loved to prank each other using fireworks. After a series of explosive “shenanigans,” Rhode Island banned the use of fireworks for “mischievous ends.”

Later, at the turn of the 20th century, anti-noise activists like those in the New York-based Society for the Suppression of Unnecessary Noise ( yes, they really did exist) campaigned against the use of fireworks and other contributors to “urban hubbub.” Their efforts actually helped several U.S. fireworks regulations pass into law.

Nowadays, the U.S. Consumer Product Safety Commission (CPSC) and the Bureau of Alcohol, Tobacco, Firearms and Explosives (ATF) are the federal bodies responsible for creating safety regulations for fireworks. Each state also has its own laws regarding fireworks licenses and usage rules — be sure to read up on local laws before you light up!

How Other Countries Do Their Fireworks

Since the beginning, humankind has always enjoyed blowing things up. Communities around the world still celebrate religious and national holidays with explosive fireworks shows — some festivals have lasted for centuries!

Check out how the rest of the world gets lit for their favorite days.

The festival's roots can be traced back to 1773 when the island of Kyushu was suffering a devastating famine. The story goes that the ruling shogun, Tokugawa Yoshimune, launched a fireworks display as part of the yearly Day of the Dead festival, providing a welcome distraction from the hardship.

The fireworks display, originally known as the Ryogoku Kawabiraki, became a national tradition over the following years.

The U.S.A. isn't the only North American country that loves setting things on fire. The Montreal Fireworks Festival — officially named L'International des Feux Loto-Québec — is the most prestigious pyrotechnics competition in the world. Taking place over the course of several weeks, the festival attracts enormous crowds every summer.

Going strong since 1985, the festival consists of a competition between leading fireworks companies from around the world. Each competitor puts on a 30-minute pyromusical show for the audience, creating a unique, thrilling experience you just have to see. 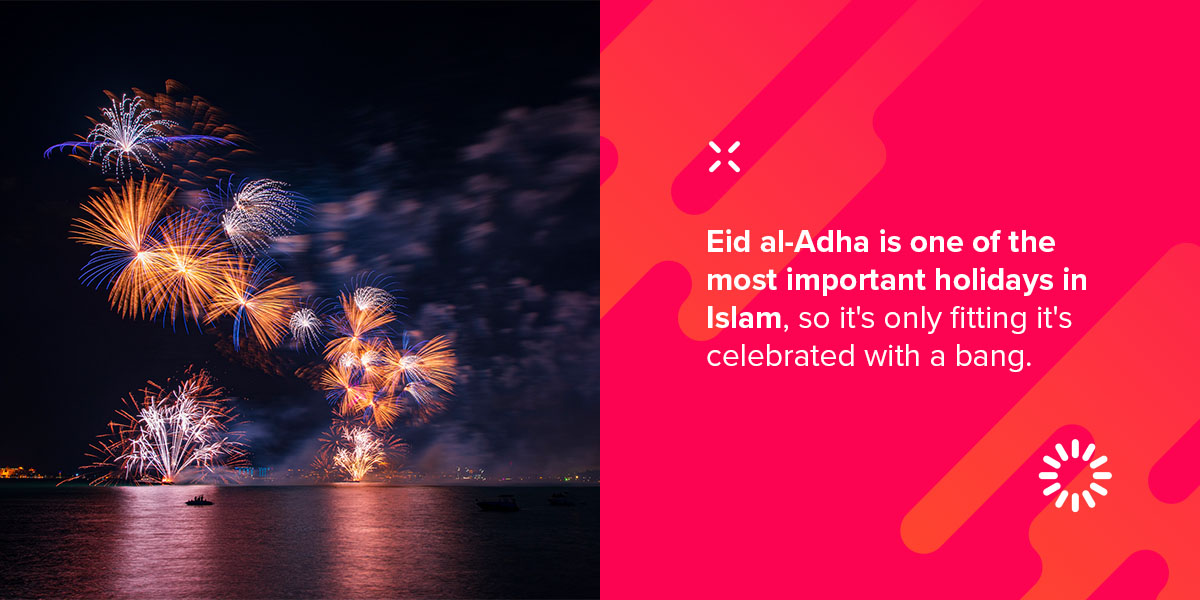 Eid al-Adha is one of the most important holidays in Islam, so it's only fitting it's celebrated with a bang. The holiday's name means “Feast of Sacrifice,” referring to the Prophet Ibrahim's willingness to obey Allah by sacrificing his son Ismail — in Christianity and Judaism, these figures are known as Abraham and Isaac, respectively. As part of their celebration of the story, Muslims set off striking fireworks shows.

The holiday is also special because it falls on the final day of the annual Hajj, or pilgrimage, to the holy city of Mecca, which all Muslims must complete at least once during their lifetime. While Muslims celebrate Eid al-Adha with fireworks around the world, the celebrations in Dubai are especially breathtaking.

Guy Fawkes was an English Catholic who lived in the early 17th century when Catholicism was basically illegal in England. He and his radical Catholic buddies originally planned to assassinate King James I by blowing up the House of Lords, one of the two bodies of Parliament.

Instead, the assassination, known as the Gunpowder Plot, failed, and all the conspirators were executed. The United Kingdom now celebrates this day as a reminder of good triumphing over evil. We can't help but mention that it's a bit ironic that the modern Guy Fawkes Night celebrates the failure of a gunpowder plot by successfully igniting colorful bundles of gunpowder and launching them into the sky.

Diwali, the Hindu Festival of Lights, takes place over five days between October and November every year. The fireworks typically go off on the third day of the festival, when many Hindus honor Lakshmi, the goddess of wealth and fortune.

The holiday is deeply symbolic in its celebration of light prevailing over darkness. In addition to setting off thrilling fireworks displays, Indian people celebrate Diwali by lighting bonfires and leaving candles in clay pots outside their homes to ward off evil spirits.

Fireworks are essential to ringing in the Lunar New Year, which is celebrated in China, Hong Kong and in Chinatowns around the world.

This holiday has deep roots in Chinese legend. According to one story, a monster would attack villagers at the beginning of each year. The villagers learned that they could scare Nian away using the color red, bright lights and loud noises — thus, the tradition of celebrating a new year with red fireworks and firecrackers was born. Other traditions include dragon dances in the streets, special foods and the Lantern Festival, which sometimes coincides with fireworks shows. The sight of lanterns floating into the sky with brilliant fireworks in the background is truly something to behold.

Christmas celebrations in Lima, Peru — and throughout South America — involve setting off fireworks with family. On the days leading up to Christmas Eve, known as La Noche Buena in Spanish, fireworks vendors line Lima's streets.

Families get together on La Noche Buena to have a traditional holiday dinner, exchange gifts and — you guessed it — set off fireworks in the streets.

Fireworks of the Future 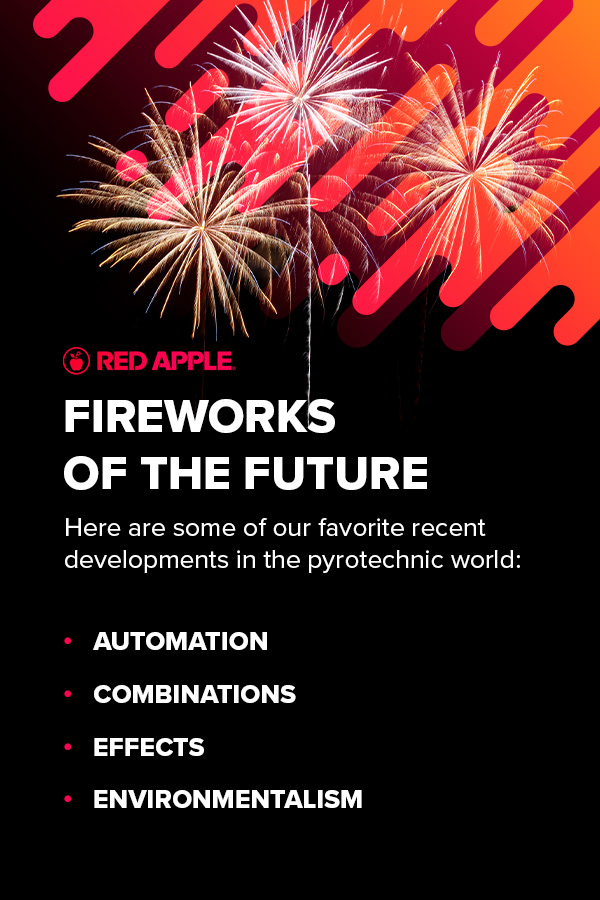 Even after more than two thousand years, the recipe for modern fireworks has stayed mostly the same. But we're always pushing the envelope.

Here are some of our favorite recent developments in the pyrotechnic world:

From new technologies to increasingly innovative choreography, fireworks have a bright future ahead. And we're stoked to be a part of it.

Choose Red Apple® for Your Next Fireworks Event!

Look, at Red Apple ®, we're crazy about fireworks. We're constantly refining our designs and traveling the world to source the best manufacturers. It may sound like a lot, but we consider it a labor of love.

So whether you're putting on a show at a local sports meet or lighting up the sky for the Fourth of July, we've got something for you. You can shop our collection online or see what we have in store at one of our locations. We'll ship your fireworks right to you in most states so you don't have to worry about traveling. 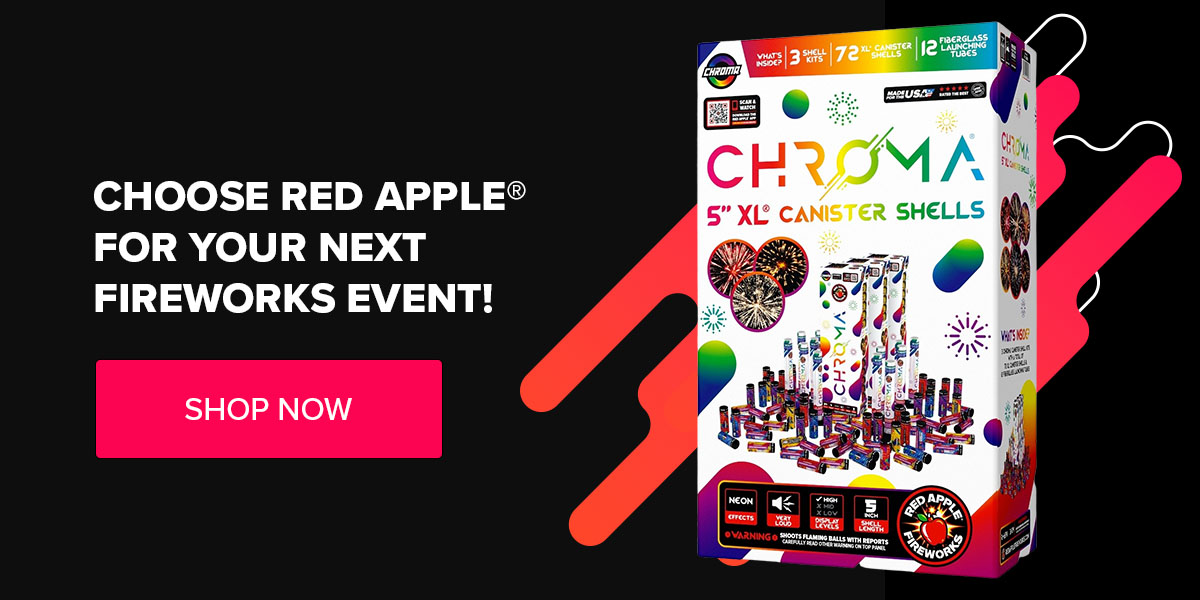