When people think America, they think FIREWORKS. And maybe apple pie or red, white and blue. But there's no doubt that fireworks are an iconic part of American culture — mostly because we celebrate the Fourth of July with some BIG booms.

Ever found yourself wondering why America and fireworks are practically synonyms? Join us on the journey of fireworks, from ancient China to your backyard cookout.

First, a Brief History of Fireworks

It all starts with the humble bamboo plant. Way back in 200 B.C., the Chinese people of the Han Dynasty began roasting dry bamboo. Unfortunately, it wouldn't satiate any munchies. Instead of sizzling away to a tasty treat, the trapped air inside the bamboo would heat up and explode — creating the original firecracker. They were even called Baozhu, which means “exploding bamboo."

According to legend, the villagers started using their Baozhu to shoo away a monster named Nian, who would spend its New Year's Eve hunting down villagers. To keep the New Years' festivities on track, the villagers would set off their bamboo bombs. The cracking sound would send Nian running and keep everyone safe and sound on New Year's Day.

These firecrackers became a big part of New Years celebrations, often being set off all the way until the Lantern Festival in February or early March. Not a bad way to start off the year. 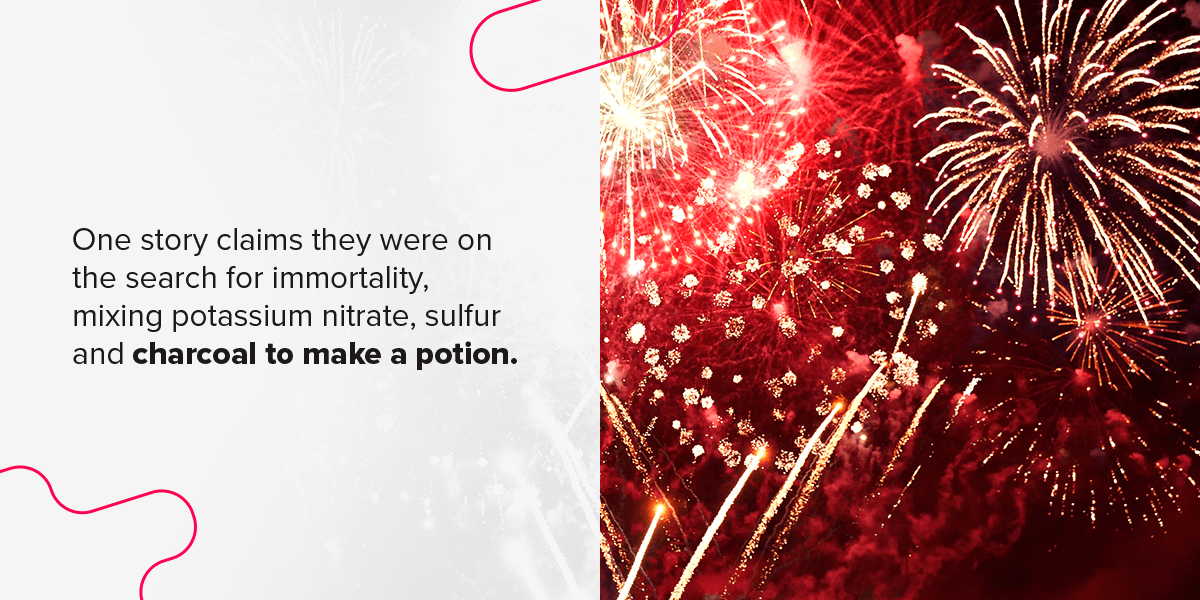 Bamboo firecrackers worked pretty well for a few hundred years. Then, on some fateful day between 600 A.D. and 900 A.D., Chinese alchemists discovered gunpowder. One story claims they were on the search for immortality, mixing potassium nitrate, sulfur and charcoal to make a potion. They got explosives instead. While it wasn't immortality, they couldn't know how much we'd LOVE their invention a millennia later.

In any case, once they had the gunpowder, someone had the brilliant idea to fill the bamboo shoots with the stuff and toss them into firepits. It made a much more satisfying boom. Of course, this wasn't very flashy, so they eventually added steel dust and iron shavings to really make these firecrackers sparkle. They also fine-tuned them by adding paper tubes instead of bamboo and creating fuses, so the fireworks could be set off from anywhere instead of being thrown into a fire.

We can even thank the Chinese for the classic red color that many manufacturers use on firecrackers today. Red is a lucky color in Chinese culture, so it was a great pick for the firecrackers, which were often used in celebrations and religious ceremonies. People would leave the red paper on the ground for about a day so they wouldn't “sweep away the good luck.”

By 1200 A.D., the Chinese military realized they could step up their game by strapping these firecrackers onto their arrows and sending some bangin' projectiles past enemy lines. Eventually, their bomb arrows became bomb rockets that could fly without any assistance. Essentially, the Chinese military was essentially inventing the first aerial fireworks. They might have lacked any kind of color or shape, but it was the 11th century, so we won't hold it against them.

When trade opened up in the 13th century, the ingredients for gunpowder — and the secret recipe — reached Europe. A range of diplomats, explorers and even missionaries helped popularize fireworks in the West. By the time the Rennaisance hit, Europeans were using fireworks in all sorts of celebrations, like military victories, holidays and even Anne Boelyn's coronation.

Other rulers, including Peter the Great and Henry VII, were also big fans. Henry VII started his marriage off with a bang with a fireworks show on his wedding day, while Peter the Great made sure no one would forget his son's birthday by putting on a five-hour show. King James II even awarded his firemaster, the man lighting off the fireworks, a knighthood for his hard work.

Fireworks were eventually used in a wide range of entertainment events and religious festivals, lighting up European skies. They were especially popular in Italy, where inventors were hard at work giving their fireworks a little more, well, spark — but more on that later. 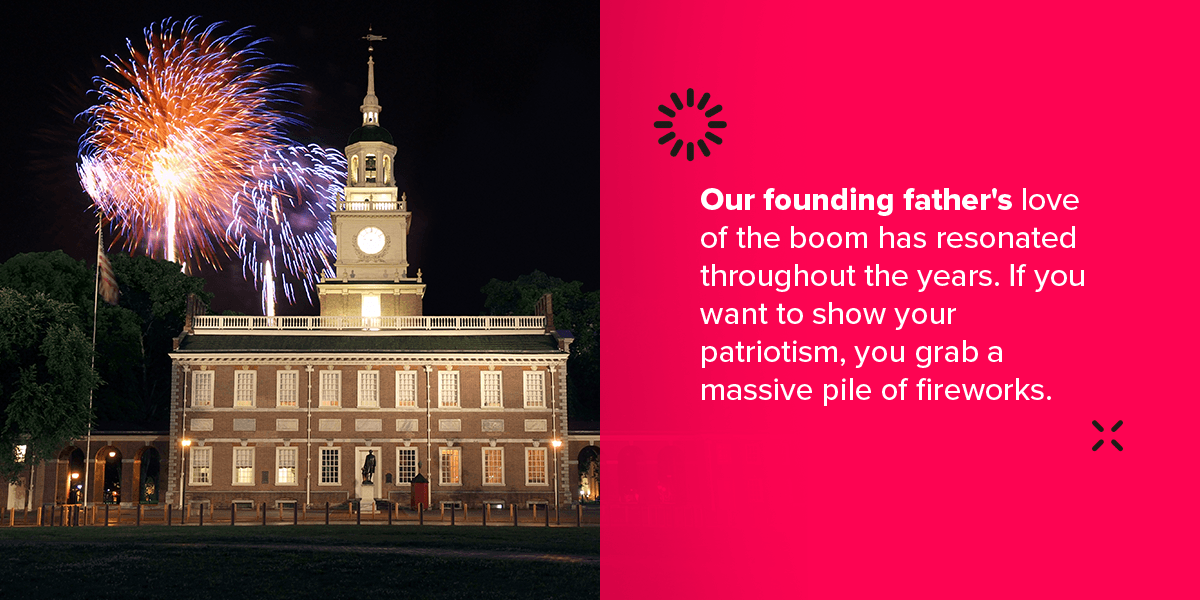 The Founding Fathers of Boom

Across the pond, the Revolutionary War was creating a different kind of boom, but the Americans were still in the loop about just how cool fireworks were. In fact, legend has it that Captain John Smith created the first fireworks show in America in Jamestown, Virginia. Talk about making an entrance!

Later, on July 2nd, 1776, John Adams wrote a letter to his wife with a vision of fireworks dancing in his head. He said that that day would be the most memorable day in the country's history and that Americans would party hard with a TON of fireworks and good vibes until the end of time. Okay, so we're paraphrasing, but you get the idea.

Although Americans didn't see any fireworks in 1776, Adams' vision came to light in 1777, when fireworks cracked off over Philadelphia for the Fourth of July. Political events and other big gatherings started using fireworks to draw in big crowds and make a splash.

Our founding father's love of the boom has resonated throughout the years. If you want to show your patriotism, you grab a massive pile of fireworks. That's just how it is — we don't make the rules. The city of New York even used fireworks to mark the 100th anniversary of the Statue of Liberty with, at the time, the biggest show ever. Now, two of the most popular holidays for fireworks are the Fourth of July and Labor Day. People get to show their patriotism while blowing stuff up. It's a win-win for everyone.

Still, not everyone loves fireworks. Thanks to some shenanigans, Rhode Island even outlawed them completely in 1731, and a few other states and cities added rules and regulations. Nowadays, you'll find rules virtually everywhere to keep folks safe, some stricter than others. Although fireworks have come a long way since the 1700s, this kind of guidance has been an important part of making fireworks accessible to everyone without putting the general public at risk.

Up to this point, fireworks were typically reserved for large events and gatherings, and they were a little lackluster. They were just bright, without the colors and shapes we know today. If you wanted to see a giant smiley face in the sky in the 1700s, you were out of luck.

Fortunately, fireworks have come a long way from smoldering bamboo. By the early 1800s, the fireworks market started to take shape. Everyone's favorite explosives got safer, cooler and easier to get:

In 1870, Congress also gave the green light to make Independence Day official. It became one of the biggest celebrations in the country, year after year. Still, since Joe from down the street could get some impressive fireworks whenever he wanted, people started to branch out and use them for more events.

Now, fireworks are no longer confined to Independence Day, being used in everything from birthday parties to the Olympics. In 2020, Americans set off a whopping 404.5 million POUNDS of fireworks — a number that's 55% higher than it was in 2019! Simply put, Americans love their fireworks, and they're showing no signs of slowing down. 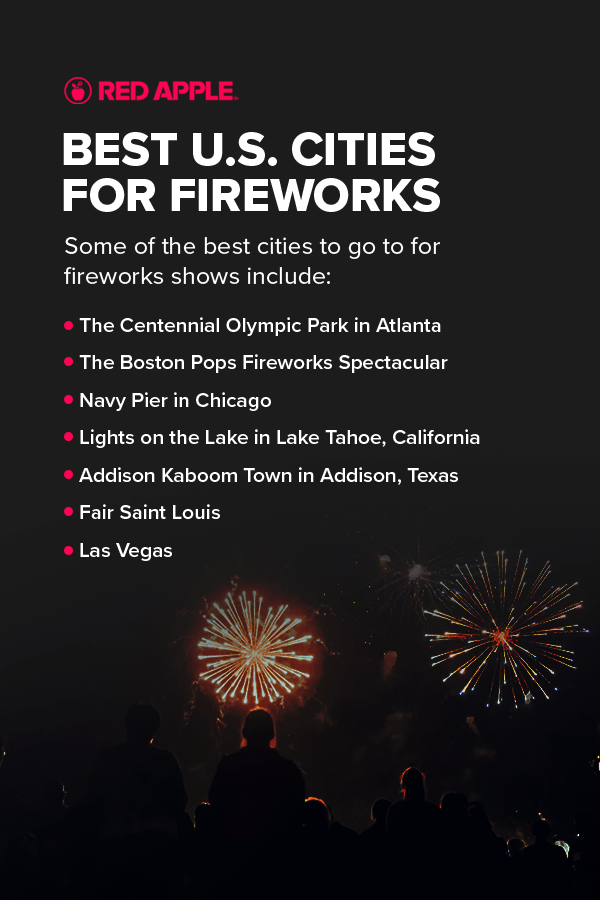 So, where does the colorful history of fireworks take us today? You can find impressive fireworks displays all over the United States. If you want to see one of the best shows of your life, consider a trip to a big city. They tend to have stellar displays that take full advantage of modern fireworks. Of course, you can also find some amazing shows in smaller towns, too.

Some of the best cities to go to for fireworks shows include:

But if you don't want to travel, you can have a dazzling display from anywhere — well, anywhere that local laws allow it. From powering a large-scale fireworks show to setting off a few aerial cakes during your family cookout, you have plenty of options with today's modern fireworks. Start by checking the APA's handy resource on state laws to see what's legal in your area.

Our ancestors have really set us up for success. We're long past the days of colorless bamboo bombs so you can now find a MASSIVE range of styles, including:

You can find fireworks sold everywhere, from large warehouses to tents outside the grocery store, but the best way to buy trusted fireworks and get the widest selection is to buy online.

Whether you're looking to buy by the pallet or choose individual options, buying online gives you the best selection. It also helps you buy from trusted manufacturers and a reputable dealer, so you can sit back and enjoy the show, knowing your fireworks are reliable. Here at Red Apple, we aim to make it simple to buy quality fireworks. We scout out the best brands and perform hands-on testing to ensure our products meet our pyromaniac team's ridiculously high standards.

Firework newbies and seasoned pyros alike come to Red Apple for dazzling, high-quality fireworks delivered right to their doors. Check out our selection online, or reach out to us to learn more!